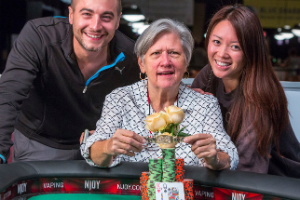 Jacquelyn Scott, won her first champion in the $10,000/$1,000 Ladies No-Limit Hold’em, the Event on this year’s WSOP schedule. She captured her first-ever WSOP gold bracelet and the amount of $153,876 among a field of 795 fellow female players.

Jacquelyn Scott, born in Michigan 66 years ago, now lives in Florida, is a real estate agent. She isn’t a professional Texas player. She was once a nurse and medical equipment sale and sold the first defirillator in USA in 1990s.

It could be said that the Ladies Poker Championship has quite a long history, as it was first held in 1977. As many as three female players have won the event more than once – Nani Dollisson, Barbara Enright, and Susie Isaacs. Now, Ms. Scott has added her name to the list of the notable winners.

It was Ms. Scott’s first time to take part in Ladies No-Limit Holdem Championship. It was also her first time to enter the finals table of WSOP and the first time to get the WSOP Bracelet.
In the pass time, Ms Scott has ever played the WSOP games six times, and several times played the World Poker Tour in Florida. In 2009, she met the former winner Greg Raymer and the actor Jason Alexander in the games, and had the contest for as long as 11hours.