Carol Fuchs Got Her First Bracelet in the $1,500 Dealers Choice Event 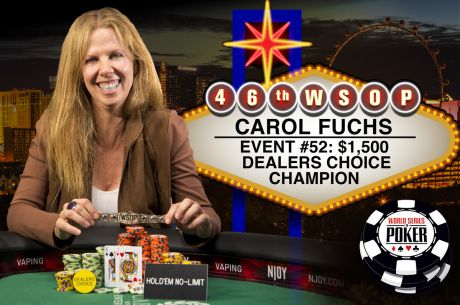 HCarol Fuchs won the In the WSOP Event #52: $1,500 Dealers Choice Champion and got her first bracelet and the $127,735 first-place prize. It’s really an amazing story about an amateur female player tops one of the toughest tournaments on the schedule at the World Series of Poker.

It’s said that only 21 females have won open events (excludes ladies-only tournaments) in the 46-year history of the WSOP. On Saturday night, Carol Fuchs, a Hollywood screenwriter and former entertainment lawyer, successfully added her name to the list.

It’s very encouraging for all players, especial for the female and amateurs, when Carol tore through a 357-player field stacked with some of the world’s best players and won the first prize at last. Just as what Carol said, “It’s encouraging when someone like me who is an amateur, and a woman, and – let’s just say someone ‘older than 30’ – wins something big like this”. It’s a victory for Carol herself and an encouraging example for all.

Being an amateur player, Carol likes the poker games very much.  She has cashed in over 20 tournaments on her poker resume and she has numerous final tables and even a couple of wins at the Bicycle Casino and Commerce Casino in Los Angeles.

Carol never played Big O (five-card pot-limit Omaha eight-or-better) before but she got the hang of it when the tournament went on, which is really lucky. However, to win a Dealers Choice event, you need to be proficient in all of the 18 possible game variations.